Nail fungus, also known as onychomycosis, usually appears as a white or yellow spot under the tip of the nail. As it spreads deeper, it can cause changes in the color of the nail, and lead to thickening and crumbling of the nail. According to the American Academy of Dermatology, approximately 12% of the population has nail fungus. And while toenails are affected more frequently than finger nails, the problem can be easily spread and is notoriously difficult to treat. 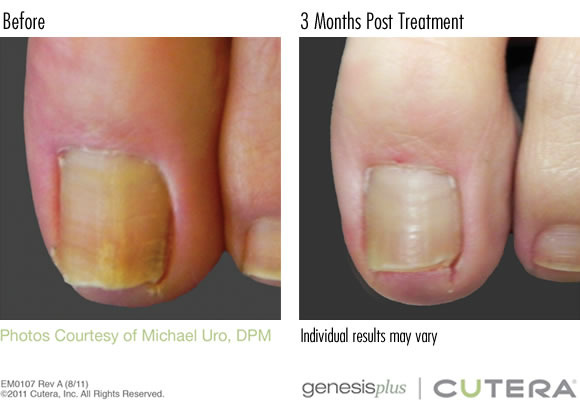 Onychomycosis is usually asymptomatic, but it can cause pain, discomfort, and disfigurement, and may produce serious physical and occupational limitations. While potentially dangerous in patients with diabetes, circulatory problems, or immunosupression, toenail fungus is often considered a cosmetic, and not a medical problem by many insurance companies for otherwise healthy patients.  For this reason, oftentimes medical treatment is not covered by many health plans. Nail fungus can be a source of embarrassment for many people, and may have a significant impact on quality of life.

Until recently, the most effective treatment for nail fungus has been oral antifungal medications, such as Lamisil (terbinafine) and Sporanox (itraconazole). These medications carry a 70% success rate, but require monitoring of the liver and may interact with other medications. A course of treatment is usually 6 weeks for the fingernails and 12 weeks for the toenails.

Other less effective, but less potential side-effect profile treatments include anti-fungal polishes such as Formula-3 (tolnaftate) and Penlac (ciclopirox lacquer). These nail fungus treatments can take 6 plus months to work, and for women, require abstaining for any other polish during the treatment course. Topical creams, home remedies (tea tree oil, vinegar, bleach, iodine) are not effective against nail fungus.

We are pleased to now offer our patients the newest, fastest, most effective technology in the treatment of nail fungus, the Cutera Genesis-Plus Laser. This 15 minute, painless, FDA-approved treatment offers results that are more successful than even oral treatments with no down time or side- effects.

Published studies have shown 70%-90% of patients with successful clearance after just two treatments spaced six weeks apart. The Genesis Plus laser procedure is ideal for almost any patient suffering from onychomycosis, even in diabetic patients. After the first treatment patients will begin to see results as healthy, clear nail grows in; complete results are seen after three to six months.

MENUMENU
Use this form to request a consultation.

The information on this website is for educational purposes only. Accordingly, any information contained within should not be construed as medical advice, evaluation, or consultation and should never be considered a replacement for a formal evaluation by the physician in his/her office and related consultation. Therefore, the information and correspondence that is involved with this website does not constitute a formal doctor-patient relationship. This website should not be used as a substitute for medical help. Opinions provided here are my own and do not represent the opinions of my employer or the medical societies of which I am a member. Explanation of off-label services and/or products that are mentioned herein does not reflect an endorsement nor promotion and should not be construed as such.
Copyright © 2017 Dr. Melissa Lazarus. All Rights Reserved. 1080 Kane Concourse | Bay Harbor Islands, FL 33154 | (305) 864-6200 phone | Follow us:
Pay Online